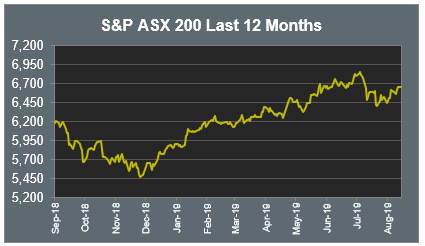 The Australian sharemarket eked out less than a 0.1% gain yesterday, in a mixed session of trade. The big four banks helped boost the Financials sector; NAB led the gains, up 1.0%, Westpac added 0.8%, while ANZ and Commonwealth Bank rose 0.5% and 0.3% respectively.

The Health Care sector weighed on the market. Industry leaders CSL and Cochlear slipped 1.0% and 0.9% respectively. The Materials sector also dragged on the market; BHP fell 0.5% and Rio Tinto lost 0.1%, while Fortescue Metals bucked the trend to rise 0.6%.

The Telecommunications sector was mixed; Telstra fell 0.3%, while TPG Telecom rose 5.5% ahead of the Federal Court case challenging the ACCC’s ban on the Vodafone – TPG merger which begins today.

The Australian futures market points to a 0.14% fall today.

European sharemarkets were mixed on Monday. The broad based STOXX Europe 600 fell 0.3%, with the Financials and Energy sectors the strongest performers, while defensive sectors Health Care and REITs led the declines.

US sharemarkets were also mixed overnight. The Energy sector rose in response to higher oil prices, while the banks helped boost the Financials sector. Technology stocks were mixed; Microsoft slipped 1.1%, while Apple rose 0.4%, ahead of the launch of the new iPhone.

Compared with a year ago, lending activity remains subdued and down 8.7%, but the pace of the decline has slowed markedly.

In retrospect, May’s result looks to have been the trough in the lending cycle, which coincided with the Federal election and enormous uncertainty in the sector given Labour’s proposed policy changes to property investments.

The number of new home loans approved for owner occupiers increased 4.2% in July, which is the fastest growth since June 2015, with multiple interest rate cuts and tax breaks appearing to be supporting the sector.

First home buyers continued to return to the market, with the percentage of first home buyers as a proportion of all dwellings increasing for the fifth consecutive month. At 19.6% in July, the proportion now stands at the highest in 7 ½ years.

However, building activity will remain constrained by a decline in building approvals, led by the fall in house prices over much of the past two years. Cladding and building integrity issues are also weighing on sentiment.

The RBA should be happy with the data, as it appears their two rate cuts are turning into improved lending data and house prices. Wages growth and inflation remain missing though. 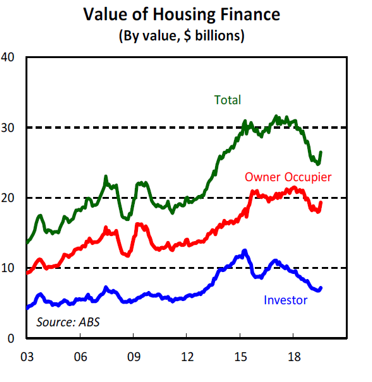