The Australian sharemarket fell 0.1% yesterday, in a mixed session of trade. The Financials sector was amongst the strongest performers, as ANZ, Westpac and NAB all rose between 1.9% and 2.3%. Commonwealth Bank fell 0.5% after the company released its FY20 results, which saw an 11.3% fall in cash profit to $7.3 billion due to ~$2.5 billion in loan impairments. The bank also announced they will pay a $0.98 per share dividend, down from the $2.31 paid out earlier this year.

Online job recruiter, Seek, slumped 8.6% after the company reported full year loss of $111.7 million, due to a significant decline in job ads on its website, the company also confirmed it will not pay a dividend.

The Materials and Information Technology sectors were the weakest performers. A sell-off in the price of gold from recent highs dragged goldminers lower, while a drop in iron ore prices caused mining heavyweights Rio Tinto and Fortescue Metals to both lose 1.4%. WiseTech Global fell 8.4% after receiving broker downgrades to drag the Information Technology sector lower.

European sharemarkets rose for the fourth straight day on Wednesday, with the broad based STOXX Europe 600 up 1.1%, despite rising coronavirus number from France, Spain and the UK. HelloFresh underperformed, down 5.5% as investors took profits, despite the company announcing record active customers on Tuesday, which nearly doubled from a year ago.

While some data suggest a modest improvement began in June, the Bank of England doesn’t expect the economy to fully recover until the end of 2021.

The second quarter decline was twice as deep as what was experienced in the US. Since the end of 2019  Britain has suffered the worst performance of any big European economy, with the exception of Spain.

Lockdowns in Britain started later than in neighbouring countries and was not eased until mid-June. The restrictions also affected a greater share of its population, for a longer period of time, especially when compared to the state-by-state shutdowns imposed in the US.

Despite the tremendously negative headline, markets continue to ‘look through’ the appalling economic data, with the UK benchmark FTSE100 gaining 2% yesterday. 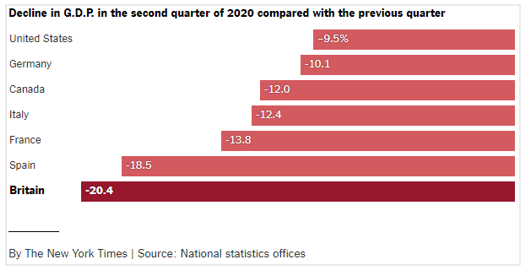