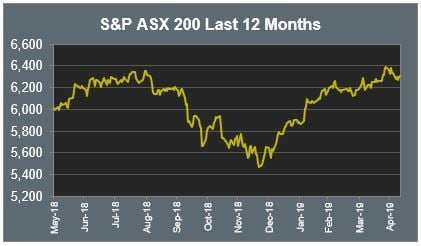 The Australian sharemarket ended the final trading session of the week 0.25% higher, with Utilities and Telecommunications stocks among the best performing.

Mining heavyweights BHP and Rio Tinto gave up 0.5% and 0.1% respectively, while Sydney Airport and Telstra boosted Industrials and Telecommunications stocks respectively, both closing up 0.9%.

The Australian futures market points to a 0.46% rise today, being driven by stronger US markets on Friday.

European sharemarkets were generally firmer on Friday. The broad based STOXX Europe 600 rose 0.3% and the German DAX climbed 0.7%, however, the UK FTSE 100 slipped 0.1%.

US sharemarkets rebounded from lows earlier in the session to close higher on Friday. Investors remained optimistic a trade deal between the US and China would eventually be secured, despite new tariffs being imposed by the US on Chinese goods. US Treasury Secretary Steve Mnuchin said discussions between the nations were “constructive”, while Chinese Vice Premier Liu He said talks were progressing “fairly well”, although details were limited. President Trump reiterated “there is absolutely no need to rush” trade talks, stating the tariffs will bring in even more wealth to the US than a good deal would.

Transportation network company Uber Technologies officially listed, ending its first trading session 7.6% lower. Despite being priced at US$45 a share, Uber opened at US$42, giving the company a valuation of around US$75.5 billion, well below the US$120 billion the company initially sought when it went public. By the close of trade, the Dow Jones and S&P 500 both lifted 0.4%, while the NASDAQ closed 0.1% higher.

There’s nothing like a drawn out trade war between two key players to give volatility a little boost.

With the fallout from the end of 2018 dissipating, and reassurance from the US Federal Reserve that interest rates would be on hold for at least the major part of 2019, the Volatility Index (VIX) seemed set to nestle around the low teens for some time.

However, with the trade war dragging on, and President Trump adding fuel to the fire with a series of provocative tweets, we have seen volatility rise last week to just under 20, finishing the week at 16.

The sooner the trade discussions are finalised the better for a number of reasons.

From an investor’s perspective, a return to the 2017 days, where volatility hovered around 10 most of the year, would be a most welcome environment in which to be investing. 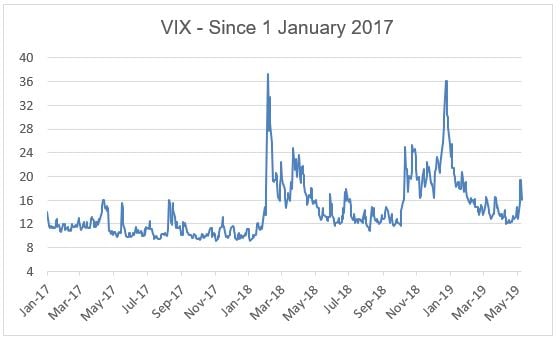