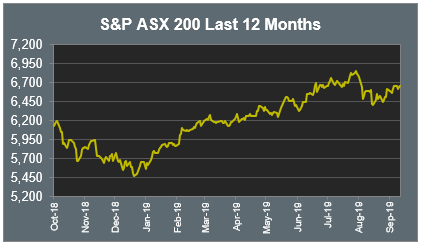 The Australian sharemarket posted a modest gain yesterday, ending the session 0.3% higher, despite giving up most of its earlier improvements as the day wore on. REITs was the best performing sector, while Utilities and Telecommunications also recorded solid improvements.

The big four banks all posted gains between 0.2% and 0.9% to lead Financials higher, while mining heavyweights BHP and Rio Tinto added 0.1% and 0.6% respectively, boosting the Materials sector.

Wesfarmers (WES) received Federal Court approval for its proposed $776 million takeover of lithium miner Kidman Resources, which is due to be delisted from the ASX today. WES ended the session 0.6% lower.

European sharemarkets firmed on Thursday. The German DAX strengthened 0.4%, the broad based STOXX Europe 600 climbed 0.2% and the UK FTSE 100 rose 0.1%.

US sharemarkets also closed higher on Thursday, led by strength in the Materials sector. Signs emerged of a de-escalation in US-China trade tensions, as both nations undertook actions perceived as goodwill towards the other. President Trump tweeted the US would delay increasing tariffs to 30%, from 25%, on US$250B of Chinese imports from 1 October to 15 October. Separately, Reuters reported China had made the biggest purchase of US soybeans since June. By the close of trade, the Dow Jones had gained 0.2%, while the S&P 500 and NASDAQ both added 0.3%.

The ECB cut interest rates further into negative territory by 10 basis points to -0.50%, a record low. It has also revived its contentious open-ended quantitative easing (QE) programme of purchasing bonds at €20bn a month starting in November, until inflation expectations come close to 2%, at which point interest rates could start rising again.

However, the ECB is facing resistance from France, Germany and the Netherlands, who suggest lower interest rates are doing more to fuel a real estate bubble and erode pensions, rather than reboot the economy.

With what some call the greatest monetary experiment of all time, negative interest rates and QE are leading to the distortion of asset prices. Given Draghi has limited tools at his disposal, the responsibility now falls on the 19 member countries to implement better fiscal policy and other home-grown measures.