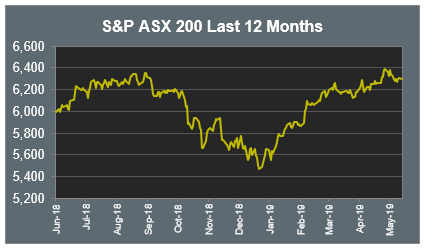 The Australian sharemarket fell 0.2% yesterday, weighed down by heavy losses in the Financials sector. ANZ and Macquarie Group both went ex-dividend and lost 3.9% and 3.5% respectively. Commonwealth Bank lost 2.5%, after reporting a 9% fall in cash earnings from the previous quarter. The company also reported it has set aside $714 million for customer remediation.

Lendlease Group surged 8.7% after media reports a Japanese suitor is working on a potential takeover bid, however the company said it has received no approach.

The Australian futures market points to a 0.86% fall today, being driven by weaker international markets.

European sharemarkets fell on Monday in response to an escalation of the US-China trade war. Germany’s DAX lost 1.5%, the broad based STOXX Europe 600 fell 1.2% and the UK FTSE 100 lost 0.6%.

US sharemarkets also closed lower overnight, due to the ongoing trade concerns. The Dow Jones and S&P 500 both fell 2.4%, while the NASDAQ slipped 3.4%. Apple lost 5.8% and shares in Boeing fell 4.9%, while newly listed Uber Technologies dropped a further 10.75%.

Yesterday’s domestic Housing Finance data showed a 2.8% fall in owner-occupied home lending (ex – refinancing) for March, the fourth drop in five months. February’s rise proved a ‘dead cat bounce’, highlighting the need to focus on the longer term trend, rather than monthly data, which can be misleading.

All States and Territories recorded annual weakness, led by NSW -17.6%, Queensland -14.1% and Victoria -13.6%. Loans for the purchase of new dwellings were down 33.5% for the year to March, the weakest since late 2008, coinciding with a large fall in approvals, particularly for apartments.

Investors have been hit the hardest on the back of tighter lending measures, with investor loans down 2.7% in March, the 8th consecutive month of decline. APRA recently ended its cap on investor loan growth, while other restrictive measures remain in place. With uncertainty heading into the Federal Election, on the back of Labor’s policies around negative gearing and capital gains, means investors are unlikely to re-enter the market any time soon.

On a slight positive, first-home buyers as a proportion of all dwellings increased to 18% in March, on the back of falling prices resulting in an improvement in affordability. However, it is too early to say there is a convincing uptrend in first home buyers in the market.

While there have also been some tentative signs of improvement in higher auction clearance rates, and an easing in price declines in Sydney and Melbourne, yesterday’s data suggests housing demand remains weak. Negative sentiment and entrenched expectations of further declines in house prices, suggest soft conditions are likely to persist for a while longer.