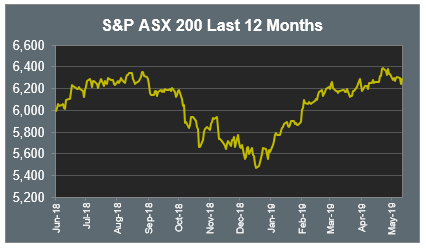 The Australian sharemarket bounced back from Tuesday’s losses, as concerns about US-China trade tensions eased. The local index closed up 0.7%, as all sectors ended the session higher, led by Energy, Health Care, Information Technology and Materials.

Energy stocks were buoyed by higher oil prices on Tuesday night, as an unexpected increase in US crude oil inventories was overshadowed by increased concern tensions in the Middle East could impact global supply. Woodside Petroleum gained 1.5% and Oil Search rose 1.1%.

European sharemarkets rose on Wednesday, boosted by encouraging economic growth figures in the region. The broad based STOXX Europe 600 rose 0.5%, the UK FTSE 100 gained 0.8% and the German DAX lifted 0.9%.

US sharemarkets continued their rebound overnight, following reports President Trump will delay a decision on auto tariffs by up to six months. Treasury Secretary Mnuchin announced he expects trade talks with China to resume soon, while stating negotiators were close to a deal with Mexico and Canada to remove metals tariffs. Alibaba rose 1.6%, after the Chinese e-commerce giant beat fourth-quarter revenue forecasts, with group revenue for January to March rising 51%. By the close of trade, the Dow Jones had gained 0.5% and the S&P 500 lifted 0.6%, while the NASDAQ climbed 1.1%.

When the RBA left the Official Cash Rate on hold last week, there was suggestion they did so because of the impending Federal election and their desire to remain out of the frame until the election was over.

Instead they painted a less than rosy picture of the Australian economy for the next 12 to 24 months, and lowered their expectations for economic growth, employment and inflation.

They then went on to make the following statement, “a further improvement in the labour market was likely to be needed for inflation to be consistent with the target”.

This statement was at odds with their own forecasts, as they don’t expect the labour market to improve until “June 2021”.

Yesterday’s Wage Price Index announcement shows public sector wages growth in the quarter at the lowest level since the series began in 1997, and along with a steady unemployment rate, suggests inflation will remain low for some time.

The confused message from the RBA suggests they didn’t want to get in the way of the election, but couldn’t explain their rationale in a consistent manner with the underlying economic data. 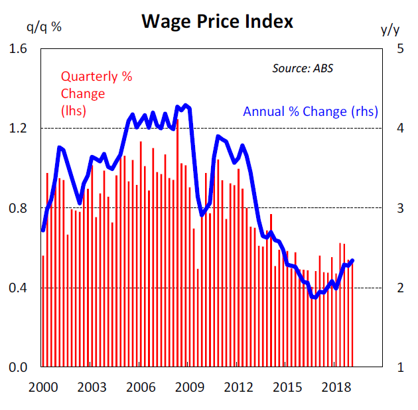