The Australian sharemarket ended yesterday’s trade flat for a second consecutive session, as gains from Financials and Materials stocks helped offset weakness amongst Industrials and Information Technology names. The big four banks all closed up between 0.5% to 1.2%, led by ANZ, while mining heavyweights BHP and Rio Tinto gained 1.0% and 0.4% respectively.

Leisure and travel stocks fell on fears of a second wave in China and some US states, as well as the decision by the Victorian Government to tighten some of its restrictions in response to a spike in COVID-19 infections. Crown Resorts, Flight Centre and Qantas all slid 4.1%, while Webjet tumbled 5.0% and Sydney Airport slipped 1.7%.

The Australian futures market points to a 0.57% rise today, driven by stronger US markets overnight.

European sharemarkets fell on Monday, with investors cautious amid signs of a possible resurgence in coronavirus cases in Germany, as the nation’s reproduction rate rose to 2.88%, a rate that reveals infections are increasing above the level needed to contain the virus over the longer term. Airliner Lufthansa fell 3.2% following last ditch talks between the German government and the group’s largest shareholder over a possible bailout, while scandal-hit payments company Wirecard fell a further 44% after it announced a quarter of its assets totalling €1.9 billion probably did not exist.

US sharemarkets rose overnight, as investors remained optimistic central bank support and further easing of restrictions would offset any negative effects of a surge in COVID-19 cases throughout the south and southwest regions. Amazon (1.5%), Microsoft (2.8%) and Square (6.4%) all hit record highs, while Apple rose 2.6%, after the company announced plans to make chips for its Mac computers.

The total number of COVID-19 cases surpassed 9 million last night. The lifting of restrictions was always going to accompany the risk of infections rising once again, and unfortunately, this risk is being realised.

The highest number of new cases was in Brazil of over 55,000, followed by the United States recording over 33,000 for two consecutive days, a figure not recorded since 1 May.

Most concerning is the news of rising infections in places where the virus had been relatively well contained, including parts of the US and China.

Australia has not been immune either. In Victoria, Premier Daniel Andrews imposed restrictions after new cases hit double-digits, the highest in over two months.

The impact on both business and consumer confidence as households become wary about the virus being contained and the potential for a second wave will continue to have a direct negative impact on economies, as businesses are unable to resume normal operations, or operate at full capacity.

With a quieter week in terms of economic data, new cases of COVID-19 are going to take greater importance in driving sentiment and potential volatility in financial markets. 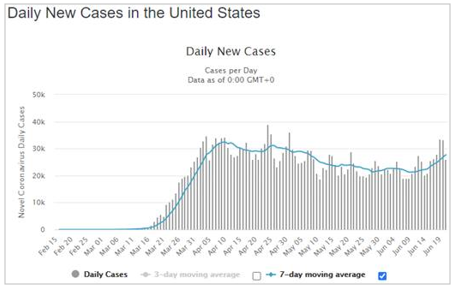