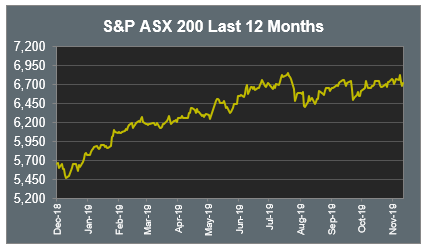 The Australian sharemarket ended the final trading session of the week higher for the first time since Tuesday, led by strong gains in the Energy, Industrials, Information Technology and Materials sectors. Despite Friday’s gains, the ASX 200 endured its worst week in two months, as uncertainty around the US-China trade dispute continued to weigh on the market.

The Financials sector continued to be weighed down by Westpac, which gave up 1.6% on Friday, to end the week ~7% lower. The stock has now fallen to its lowest level since February, as its board said it "unreservedly apologises" for the money laundering and child exploitation scandal involving unmonitored payments to Southeast Asia. The other major banks were mixed; Commonwealth Bank strengthened 0.3% and ANZ lifted 0.2%, while NAB slipped 0.2%.

The Australian futures market points to a 0.18% rise today, being driven by broadly stronger international markets on Friday.

European sharemarkets rose on Friday, as positive news around the US-China trade deal and upbeat economic data out of major eurozone economies helped shares to log their best session in three weeks. Adjusted German GDP data confirmed the economy grew 0.1% in the September quarter, while French business activity rose in November. The German DAX gained 0.2%, the broad based STOXX Europe 600 rose 0.4% and the UK FTSE 100 strengthened 1.2%.

US sharemarkets also ended the session higher on Friday, as both the US and China made positive comments about a phase one trade deal, with President Trump stating a deal was “potentially very close”. Nordstrom rose 10.6%, after the luxury goods retailer announced quarterly profit beat forecasts. Tesla fell 6%, following mixed reviews on its newly unveiled electric pickup truck. By the close of trade, the Dow Jones gained 0.4%, while the S&P 500 and NASDAQ both added 0.2%.

According to new estimates from the OECD, the world economy is now growing at its slowest pace since the financial crisis, as it expects global GDP growth of 2.9% for both this year and next, down from 3% in 2020. OECD chief economist Laurence Boone reported that "it would be a policy mistake to consider these shifts as temporary factors that can be addressed with monetary or fiscal policy: they are structural".

While not an OECD member, China is tracked by the OECD, and is forecast to grow marginally faster in 2019 than had been expected in September, with growth of 6.2% rather than 6.1%.

However, the OECD said China will lose momentum, with growth of 5.7% expected in 2020 and 5.5% in 2021, in the face of trade tensions and the gradual transformation of activity away from exports.

Interestingly, the outlook for Britain improved marginally from September, as the prospect of a no-deal exit from the European Union recedes.