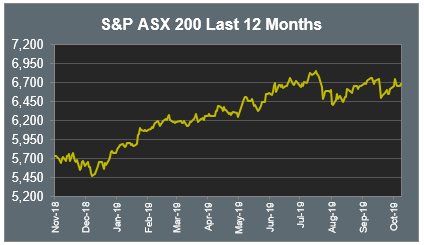 The Australian sharemarket extended its winning streak to six sessions yesterday, led by improvements in the Energy, Industrials and Materials sectors. Energy stocks were boosted by higher global oil prices, with the commodity last week recording its largest weekly gain in five weeks.

Consumer Staples was the worst performing sector, dragged lower by Coles and Woolworths, which gave up 2.7% and 0.3% respectively, while Financials was weighed down by the big four banks, which closed mostly lower.

European sharemarkets rose to their highest level since January 2018, led by automotive and resources stocks on hopes of a resolution to the US-China trade war. However, banks capped gains in the region, following a disappointing earnings result from HSBC, which ended the session 3.7% lower. The broad based STOXX Europe 600 rose 0.3% and the German DAX gained 0.4%, while the UK FTSE 100 rose just 0.1%, after the European Union granted the UK a three-month Brexit extension.

US sharemarkets also lifted overnight, with President Trump announcing the US is ahead of schedule to sign a partial trade deal with China. AT&T and Spotify ended the session 4.3% and 16.2% higher respectively, after both companies reported stronger-than-forecast profits. Microsoft hit a record high after the technology giant secured a US$10bn defence contract with the Pentagon for its cloud computing services, ending the session up 2.5%. Tiffany's gained 31.6% after the jeweller received a reported US$14.5bn takeover approach from LVMH, while Fitbit soared 30.9% on reports Alphabet has made a bid to acquire the company. By the close of trade, the Dow Jones rose 0.5% and the NASDAQ lifted 1.0%, while the S&P 500 added 0.6% to close at a new all-time high.

Part of the reason the ‘r’ word has been bandied around a lot of late is due to the fact that we haven’t had one in such a long time, and statistically this isn’t normal. Australia has seen an unprecedented 27 years of economic growth since the 1991 recession, which Paul Keating stated was “the recession we had to have”.

If the current expansion continues in the US until January 2020, this will be the first decade a recession has not occurred since such records have been kept. Recessions are relatively common, occurring once or twice each decade. A recession is two consecutive quarters of negative economic growth, which neither Australia nor the US are even remotely close to.

Factors that usually cause a recession are high interest rates, reduced consumer confidence and reduced real wages. We are currently at record low interest rates, and wages growth, whilst sluggish, is still growing greater than inflation.