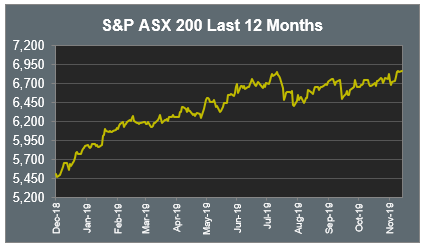 The Australian sharemarket ended the session 0.2% higher yesterday, led by gains in the Utilities sector. Health Care stocks were another stand out, boosted by CSL, which gained 0.9% to close at a new all-time high. CSL has now gained 54.5% since the beginning of the year.

Energy stocks were among the weakest performers, following a 5% slump in global oil prices over the weekend. In response, Santos slipped 0.6%, Woodside Petroleum slid 0.8% and Oil Search lost 1.9%.

European sharemarkets fell on Monday, as US President Donald Trump announced he would immediately restore tariffs on US steel and aluminium imports from Brazil and Argentina, accusing them of devaluing their currencies to the detriment of US farmers. China also called for a rollback of US tariffs before it would agree to a trade deal. France’s CAC 40 and Germany’s DAX both lost over 2.0%, while the broad based STOXX Europe 600 fell 1.6%.

US sharemarkets also dropped overnight, as weaker US manufacturing and construction data, along with increased trade concerns, weighed on sentiment. Retail stocks closed lower, despite expectations of record Cyber Monday sales of US$9.4 billion. By the close of trade, the S&P 500 fell 0.9%, the Dow Jones slid 1.0% and the NASDAQ lost 1.1%.

Oil production has been one of the most significant factors behind the US economic recovery post-GFC, and it’s now official that the US is a net exporter of oil.

During September, the US exported 89,000 more barrels of crude oil and refined petroleum products than it imported, which marks the first full month of positive oil trade since the 1940s.

Increasing production from shale oilfields, the end of a crude export ban in 2015 and reduced petrol demand due to fuel economy improvements in motor vehicles, have all contributed to the turnaround.

That deficit will now be a surplus of hundreds of billions of US Dollars and is a game changer as far as the US economy is concerned.