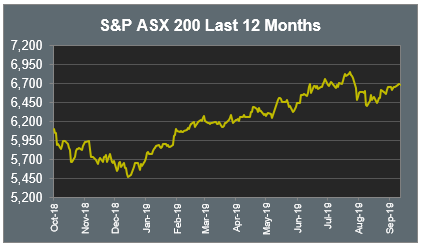 The Australian sharemarket closed lower for the first time in five days, down 0.38% yesterday. The Telecommunications and Energy sectors were the weakest performers. Telstra slipped 2.2% after the company lowered FY20 total income guidance, citing slower than expected NBN activation numbers. Energy stocks weakened amid a sell-off in the price of oil; Oil Search fell 1.5%, Santos lowered 1.1% and Woodside Petroleum slipped 1.0%.

Materials outperformed the market, being the only sector to close higher. Mining heavyweights BHP and Rio Tinto rose 0.8% and 1.4% respectively. Western Areas climbed 14.1% to a one-year high, after its joint venture partner, St George Mining, said drilling had found "massive" nickel deposits at its Mt Alexander project in Western Australia.

The Australian futures market points to a 0.23% fall today.

European sharemarkets lifted on Monday. The Materials, Health Care and Financials sectors were amongst the strongest performers. Lloyds bank lifted 1.0% and Deutsche Bank added 1.1%. By the close of trade, the broad based STOXX Europe 600 rose 0.3% and the UK FTSE 100 rose 1.0%, as a fall in the British Pound sterling helped boost the internationally focused stocks. Italy's FTSE MIB gained 0.6% after Prime Minister Giuseppe Conte said on Sunday he expected to settle talks over a new government by Wednesday.

US share and bond markets were closed on Monday for the Labor Day holiday. However, US equity futures fell after reports US and China officials struggled to schedule a planned meeting this month to continue trade talks.

This is a busy week for domestic economic data with some important numbers due to be released.

GDP growth for the June quarter is released tomorrow and is expected to show GDP for the quarter of 0.5% and an annual rate of 1.4%, which would be the weakest annual rate of growth since 2009.

Consumer spending remains soft and the construction sector is continuing to provide a drag on the economy.

Today’s retail sales data will also give an insight into the impact of the RBA’s two rate cuts, the tax rebate from the Federal Government and stabilising house prices.

Yesterday’s dwelling price data showed house prices may have bottomed, but whether these factors have flowed into consumer spending will be interesting to note in the GDP data. It appears unlikely.

Today the RBA is expected to leave rates on hold for the second consecutive month, unless they come to the realisation their previous forecasts were unrealistic and that monetary stimulus is needed sooner rather than later.