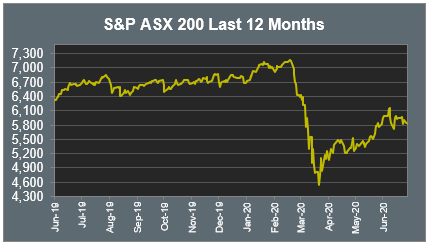 The Australian sharemarket fell 1.5% yesterday amid concerns over rising coronavirus cases in Australia and overseas. All sectors closed lower, with Energy, REITs and Industrials the weakest performers. Property stocks were hard hit as many companies traded ex-dividend.

The price of oil was lower amid concerns over weaker demand; Woodside Petroleum fell 2.8%, Santos lost 3.1% and Oil Search slipped 3.2%.

The Financials sector was dragged lower by the big four banks, with all four down between 1.0% and 1.6%. Macquarie Group slipped 2.3%, while Suncorp fell 3.4% following media reports the company will make a restructure announcement this week, which could see job cuts.

Airlines were mixed; Qantas fell 5.0% to $3.62, below the $3.65 price at which the airline raised $1.4 billion from institutional investors last week, while Reginal Express (REX) soared 17.0% after confirming it plans to operate flights between Sydney, Brisbane and Melbourne starting March 2021. REX said it would raise $30 million to initially fly with 5-10 jets, which would be at a considerably cheaper cost than Virgin Australia.

European sharemarkets ended higher on Monday in a volatile session, with the broad based STOXX Europe 600 up 0.4%. Consumer stocks weighed on the markets; Nestlé slipped 0.1%, Unilever lost 1.7% and Danone fell 2.1%, while HelloFresh bucked the trend to rise 2.7%.

When the coronavirus struck Europe in March forcing businesses to shut their doors and workers to stay at home, lawmakers had two options for limiting the economic fallout. They could support workers directly by temporarily increasing unemployment benefits and hope that laid-off workers would eventually find new jobs, or they could pay firms to keep employees on the books, at least for a while, to help prevent lay-offs in the first place. Most governments chose the latter.

Unlike America, where the number of unemployed persons has risen to over 20 million and the jobless rate soar to over 13%, European countries have avoided mass lay-offs. Instead, more than 40 million workers have enrolled in short-term furlough schemes, modelled on Germany’s short-time working program, in which governments pay workers 60-85% of their wages to work reduced hours. In Britain, France, Germany, Italy and Spain, such programs now cover a third of the workforce.

However, such schemes only alleviate pain in the short term. Unemployment will inevitably rise once these schemes are phased out, and if kept too long, they may interfere with the necessary reallocation of resources from failing businesses to successful ones.

A recent study by Allianz, a large German insurer, estimates that 9 million workers are employed in ‘zombie jobs’, in industries that will continue to struggle during and after the pandemic, including travel, tourism, hospitality, entertainment and retail.

As governments decide how long to extend their support schemes, they must also look at ways to help workers find new roles. Otherwise, they risk pouring public money into dying business, making it even harder to revive their economies.

In the longer term, furlough schemes may create ‘zombie jobs’ that economies are better off without. 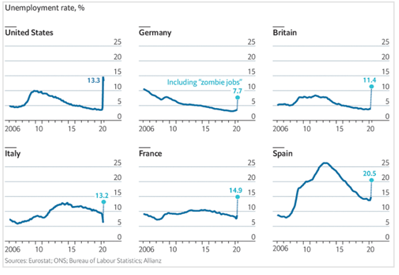