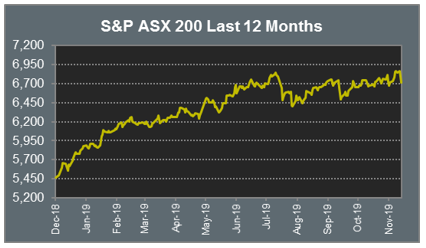 The Australian sharemarket suffered its worst day since mid-August, on renewed fears over global trade uncertainty. The local market fell 2.2%, with all sectors over 1% lower.

The Financials suffered heavy losses as the big four banks came under pressure; Commonwealth Bank led the declines, down 2.6%, NAB fell 1.8%, while Westpac and ANZ slipped 1.3% and 1.1% respectively.

European sharemarkets were generally lower on Tuesday. The broad based STOXX Europe 600 fell 0.6%, the UK FTSE 100 lost 1.8%, while Germany’s DAX rose 0.2%. LVMH Moet Hennessy Louis Vuitton SE fell 1.5%, after the US threatened duties of up to 100% on French goods including champagne, cheese and handbags.

US sharemarkets also closed lower overnight, as trade concerns weighed on investor sentiment. President Trump stated he does not have a deadline on the US-China trade deal, and it might be better to wait until after the November 2020 election. The Energy and Financial sectors were the worst performers. Goldman Sachs and Morgan Stanley fell 2.5% and 2.0% respectively, while Bank of America and JPMorgan lost 1.8% and 1.3% respectively.

Australia’s global trade has once again come to the party to not only support the domestic economy, but to break a 46 year record at the same time.

Trade figures for the September quarter drove the current account into surplus for the second consecutive quarter. It’s the first back to back account surplus in nearly 46 years, after the June quarter recorded the first quarterly surplus since 1975.

The result was driven by strong export receipts and weaker domestic demand for imports.

Iron ore prices peaked in July at just under US$120 per tonne, before subsequently falling to around US$90 per tonne for the rest of the quarter on the back of supply disruptions caused by natural disasters, coupled with stimulus measures from China.

Australia’s September quarter GDP is due to be released today, and given this trade data, it’s highly likely we will see a jump in the quarterly GDP to 0.6%, from the lacklustre 0.5% in the June quarter. 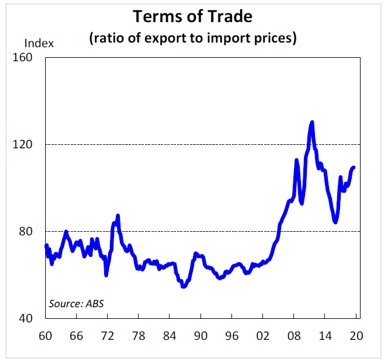