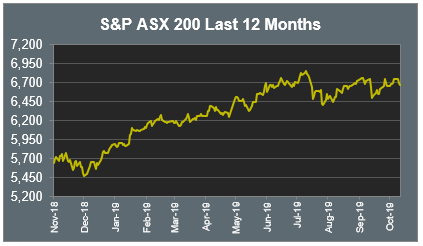 The Australian sharemarket broke a two-day losing streak to close 0.1% higher on Friday, following broad based gains, with Financials, Information Technology and Utilities the only sectors to close lower.

Financials was dragged lower by the big four banks, which all closed down 0.5% to 2.1%. ANZ was the worst performer, as the stock continued to slump following the softer-than-expected profit results on Thursday. Macquarie bucked the trend, edging up 0.3%, after it lifted 1H20 earnings 11% to $1.46 billion, but warned of a likely lower full-year profit.

The Australian futures market points to a 0.37% rise today, being driven by broadly stronger overseas markets on Friday.

European sharemarkets rose on Friday, buoyed by upbeat US jobs data and stronger-than-expected Chinese manufacturing data, which tempered nerves around slowing global growth. The broad based STOXX Europe 600 and the German DAX both rose 0.7%, while the UK FTSE 100 gained 0.8%.

US sharemarkets also posted strong gains on Friday in response to the released economic data, as well as an update on the progress of US-China trade talks. Reuters reported "Beijing's state-media Xinhua News Agency said the world's two largest economies had reached "consensus on principles" during a serious and constructive telephone call on Friday between their main trade negotiators". Fitbit rose 15.5% after Alphabet confirmed it had acquired the company for a total equity value of ~US$2.1 billion. By the close of trade, the Dow Jones rose 1.1%, while the NASDAQ and S&P 500 added 1.1% and 1.0% respectively, to both set new record closing prices.

Australian property data released on Friday showed the recovery in the housing market continues. Data from CoreLogic showed median dwelling prices across eight capital cities rose 1.4% in the month of October, the fastest monthly growth rate in almost 10 years. Prices have risen for four consecutive months since bottoming in June.

Dwelling prices gained the most in Sydney and Melbourne. Sydney prices lifted 1.7% for the second consecutive month, while Melbourne saw a 2.3% increase. Melbourne’s rise was the strongest since November 2009 when prices were recovering from their GFC lows.

The recovery in prices in recent months has been less pronounced outside of Sydney and Melbourne. However, these other cities experienced a shallower downturn. In October, Canberra and Hobart surpassed the peaks registered in the previous cycle. Sydney prices remain 10.4% below their recent peak and Melbourne 5.8% below.

The RBA’s rate cuts appear to be having a clear impact on the housing market. The outlook for the housing market has improved and price growth is expected to continue in 2020. The three recent rate cuts from the RBA and the prospect of another cut to come will continue to stoke demand. 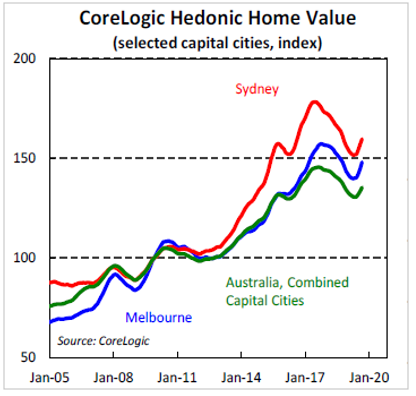