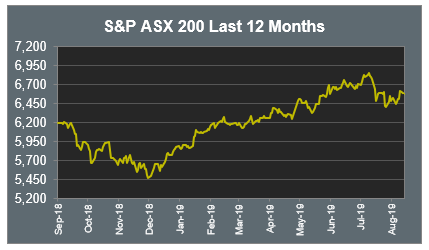 The Australian sharemarket experienced a quiet day of trade yesterday, ending the session down 0.1%, as investors lacked direction, with US markets closed for the Labor Day holiday and no fresh updates on progress in US-China trade talks. Most sectors closed lower, led by Telecommunications, as Telstra and TPG Telecom gave up 0.8% and 4.7% respectively. Downer EDI, Oil Search, Spark Infrastructure, St Barbara and Woolworths all traded ex-dividend.

Medibank Private fell 2.2%, after the ACCC filed a claim in the Federal Court against the health insurer, accusing the company of making false representations to its members and breaching consumer laws.

The Australian futures market points to a 0.6% fall today, being driven by broadly weaker markets overnight.

European sharemarkets retreated from one-month highs on Tuesday, as uncertainty about the nature and timing of the UK’s exit from the European Union weighed on investor sentiment. The STOXX Europe 600 fell 0.2%, the German DAX lost 0.4% and the UK FTSE 100 eased 0.2%.

US sharemarkets also fell on Tuesday, as the latest ISM Manufacturing PMI showed factory activity in the nation had contracted in August, for the first time since 2016. President Trump warned China he would be “tougher” on the nation in his second term if trade talks dragged on, as reports emerged US and Chinese officials were struggling to agree on a schedule for a planned meeting this month to continue trade talks. By the close of trade, the Dow Jones and NASDAQ both fell 1.1%, while the S&P 500 gave up 0.7%.

Yesterday’s record $5.9 billion Current Account surplus, the first since 1975, will no doubt attract a great deal of the headlines and prove a major positive impact on today’s GDP number. Australia has not seen a recession in 28 years, reminding us just how resilient the Australian economy has been over many years.

However, looking more closely at the results, what the surplus also reveals is the weakness in imports of consumption goods, which fell by 2.9%.

Yesterday the RBA left the Official Cash rate on hold at 1.0%, as widely expected. For now, the RBA is keeping its powder dry, as it assesses incoming data and the impact of recent interest rate cuts. Further downside risks to the economy are centred around consumption and the Current Account figures confirmed this.

Today’s GDP result will be another positive quarter. However, with commodity prices driven largely by offshore demand, notably China, we need to be reminded how vulnerable we are to overseas factors, eg a protracted trade war between the US and China. 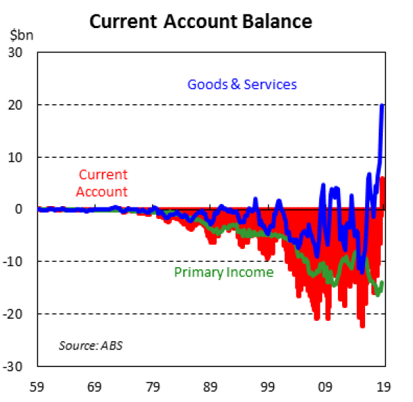