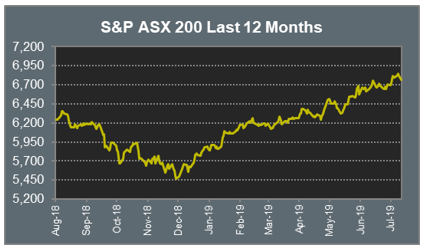 The benchmark ASX 200 index closed down 0.3% on Friday. The Energy sector was the worst performer, down 2.5%, with Beach Energy falling 5.2% and Woodside and Santos down 2.3%.

GrainCorp fell 5.4% after the bulk grains handler flagged a loss of up to $90 million thanks to continued drought and "significant" global grain market disruptions.

Bega Cheese also cut its earnings guidance on drought issues, saying the exit of many farmers from the dairy market had led to unprecedented competitive pressures. Bega shares fell 4.3% for the session.

The Australian futures market points to a flat open today.

European markets fell on Friday night, following an announcement of 10% tariffs on China’s remaining US$300 billion of exports to the United States. France’s CAC 40 dropped 3.57%, Germany’s DAX lost 3.11% and the UK’s FTSE 100 fell 2.34% for the session.

First Solar released their earnings results after the market closed on Thursday night, reporting sales of US$585 million, up 10% from the previous quarter, primarily due to increased module and system sales in the US and Australia. The Company reported a second quarter loss per share of US$0.18, compared to a loss per share of US$0.64 in the first quarter of 2019. First Solar closed 0.30% lower.

It may not technically be correct, but Woolworths, the South African owners of David Jones, believe Australia’s retail sector is in recession.

They have had to write down the value of their investment in David Jones twice in the past 12 months, with its value now $965 million, less than half the $2.1 billion they paid for it in 2014.

The blame for the underperformance is aimed directly at the Australian economy. From the second half of last year, they claim it hit a soft patch pressured by a slide in property values, stagnant wages growth and weak consumer spending, all of which were against a backdrop of weaker global demand.

Given retail sales ticked upwards by 0.4% in June after a couple of months of consecutive declines, it doesn’t satisfy the definition of a “retail recession”, but given this has been an appalling investment for the South Africans over the past five years, you can understand they are extremely critical of the Australian economy, which they claim has “slowed to its weakest level since the GFC in 2009”.