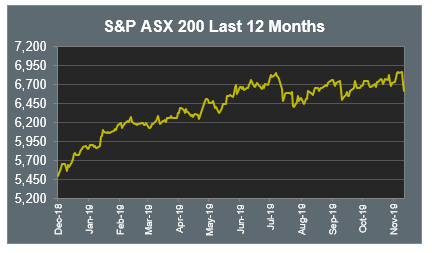 The Australian sharemarket slumped for a second consecutive session yesterday, following comments made by President Trump on Tuesday night where he raised the possibility of delaying a trade deal with China until after the next presidential election in 2020. Consumer Staples was the weakest performer; Coles fell 2.9%, Coca-Cola Amatil dropped 2.7% and Woolworths gave up 1.9%.

Health Care was the only sector not to close at least 1.0% lower, propped up by CSL, which only gave up 0.3%. The big four banks all slid between 1.0% - 2.1% to weigh on the Financials sector, while mining heavyweights BHP and Rio Tinto lost 2.5% and 2.1% respectively. Goldminers were mixed; Newcrest Mining rose 1.1% and St Barbara gained 1.2%, while Evolution Mining lost 3.7% and Saracen Mineral slipped 1.7%.

European sharemarkets rebounded on Wednesday following a four-day slump. Gains were led by the Financials and Industrials sectors, while trade sensitive stocks were boosted by a Bloomberg report which stated the US and China were close to agreeing on the amount of tariffs that would be rolled back in their phase one trade deal. The broad based STOXX Europe 600 and the German DAX both gained 1.2% and the UK FTSE 100 added 0.4%.

US sharemarkets also closed higher overnight, led by Energy stocks, following a rise in global oil prices. MasterCard slipped 0.1% after announcing it will implement a new US$8 billion share buyback program, once the remaining US$300 million repurchase of its current US$6.5 billion buyback has been completed. The payments company also increased its quarterly dividend by 21% to US$0.40/share. Technology heavyweights Alphabet (2.0%), Apple (0.9%) and Microsoft (0.4%) all posted solid gains. By the close of trade, the Dow Jones and NASDAQ both climbed 0.5% and the S&P 500 lifted 0.6%.

Australia’s GDP number released yesterday was surprisingly weak given the significant turnaround in trade data announced the day before.

Once again the major source of disappointment came from household consumption, which grew just 0.1% in the September quarter. It is the weakest quarterly rate since the December quarter of 2008.

Consumers remain cautious and reluctant to spend, with the household savings rate of 4.8%, being the highest level since the first quarter of 2017.

Discretionary spending was the hardest hit. Spending on hotels, cafés and restaurants, clothing and footwear and new motor vehicles fell the most in the September quarter.

The graph illustrates the decline in GDP, which has been languishing since the middle of last year.

Three rate cuts by the RBA this year and the addition of government tax rebates have obviously failed to revive consumer spending, which is critical to GDP growth. 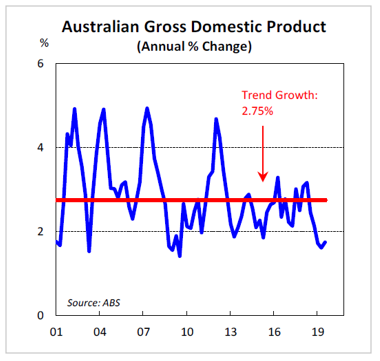