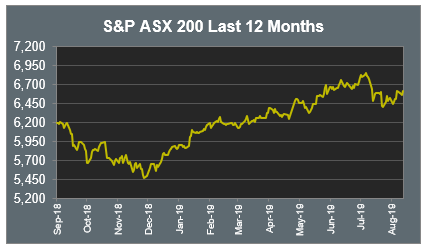 The Australian sharemarket followed the global rally in equities to record its first positive session for the week yesterday, closing up 0.9%. Gains were widespread across most sectors, with only REITs closing lower. Stocks that traded ex-dividend yesterday included: BHP, Class, FlexiGroup, Ramsay Health Care and Whitehaven Coal.

Consumer Staples was the best performing sector, led by strong sessions from Coles and Woolworths, which gained 3.1% and 2.4% respectively, while CSL boosted Health Care stocks, ending the session 1.4% higher.

The big four banks all posted solid gains of between 0.7% and 1.1% to lead Financials higher, while Energy stocks rose in response to the price of crude oil climbing to above US$60/bbl, with Woodside Petroleum and Oil Search ending the session 1.5% and 2.2% higher respectively.

TPG Telecom rose 3.2% despite reporting a 56% slide in net profit to $173.8 million, and a $236 million impairment after scrapping its planned Australian mobile network rollout earlier in the year.

European sharemarkets rose for a second straight session on Thursday, as hope remains the US and China will make progress in their ongoing trade dispute. Most of the region’s largest indices posted solid gains; France’s CAC 40 gained 1.1%, Italy’s FTSE MIB lifted 1.0% and Germany’s DAX rose 0.9%. However, the UK FTSE 100 was a laggard in the region, weighed down by several leading companies going ex-dividend, including mining heavyweight Glencore.

Boris Johnson has thrown down the gauntlet to Labour to vote for a snap election next week, but party leader Jeremy Corbyn appears increasingly likely to reject what he regards as “a trap”.

Labour is divided over whether to allow an election, as many MPs do not trust Johnson’s intentions, believing he will run down the clock to make sure no last-minute Brexit deal is possible.

Further adding to Johnson’s woes is a new law that could be passed by the British Parliament next week, which will require the Prime Minister to seek an extension to the UK’s European Union membership if he hasn’t struck a divorce deal by the end of October.

The government plans to try for another election trigger vote on Monday, and if successful, will take place on October 15, limiting the time for the elected Prime Minister to go to Brussels for a crucial EU meeting to strike a last-minute Brexit deal.