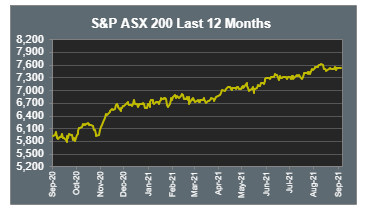 The Australian sharemarket inched lower, down 0.2% yesterday, which contributed to the market’s general lack of direction this month. Part of Wednesday’s weak performance can be attributed to the fact that over 15 companies traded ex-dividend. However, mixed commodity prices have also reinforced investor tentativeness.

The Materials and Consumer Staples sectors were among the weakest performers, down 1.0% and 1.2% respectively. BHP and Rio Tinto gave up 1.0% and 0.5%, while gold miners were the hardest hit, as Northern Star, Evolution Mining and Newcrest Mining, all tumbled between 3-5%. Meanwhile, the major supermarkets also closed lower, with Coles and Woolworths both down between 1.3-1.6%.

The Financial sector performed strongly, up 0.6%; the major stand out being Macquarie Group (4.7%), as it released forward guidance regarding expected profit thanks to favourable market conditions. The big four banks closed ahead overall, with ANZ (-0.2%) being the only detractor. The Commonwealth Bank, NAB and Westpac edged higher 0.8%, 0.6% and 0.2% respectively.

Two key performers yesterday were Australian Ethical Investment, which grew 2.8%, to represent a 35.7% monthly appreciation, along with chemical waste manager, DGL Group, up 9.9%, which signified a 42.0% increase over the last month.

The Australian futures point to a 0.47% decrease today.

European sharemarkets had their largest decline in three weeks, as the STOXX Europe 600, the UK FTSE 100 and the German DAX all lost between 0.8-1.5%. Automobile stocks were among the worst performers, down 2.2%. Banking shares (-1.2%) joined them, after Morgan Stanley reduced its price targets on key players, including Barclays (-1.6%). UK-listed BHP and Rio Tinto both conceded around 1.0%.

US sharemarkets also retreated overnight, as bullish investor sentiment dampened amid concerns around valuations and the economic risks associated with a tapering of the Federal Reserve’s open market operations. The Dow Jones and S&P 500 lost 0.2% and 0.1%, while the NASDAQ shed 0.6%. Large Technology stocks suffered, as Apple and Facebook both conceded 1.0% and 1.2% respectively. Meanwhile, PayPal fell 2.7%, despite its move into the buy now pay later market via its acquisition of Japanese firm Paidy for US$2.7 billion.

The RBA gave an insight into their thinking and outlook for inflation in a discussion paper released last week. The paper focuses on the relationship between lower unemployment and wages growth and ultimately inflation, i.e., the Phillips curve.

The RBA is of the belief the “unemployment rate will fall to a four decade low over the next few years”. In which case, they would normally hold the view that rising inflation is looming. The conclusion of the paper is that wages growth will generally increase as unemployment falls, but unlikely to accelerate quickly, even if we do reach historically low levels of unemployment.

As a result, it is therefore unlikely that inflation will accelerate sustainably higher and require the RBA to tighten monetary policy, i.e., raise interest rates.

This is not new. The RBA have been saying for several years that wages growth is less responsive to lower unemployment levels, due to the degree of slack in the domestic labour market, as evidenced in the stubbornly elevated underemployment rate.