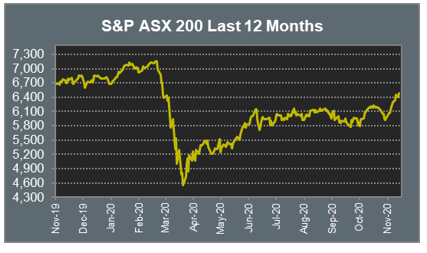 After only 25 minutes of trade on Monday, a market data issue suspended trading for the rest of the day. Prior to the trading halt, the ASX 200 saw a strong start to the week, up 1.2%. Gains in the shortened session were broad based, with only the Information Technology sector in the red.

The Health Care sector was also up at the time of suspension. CSL climbed 1.8% after the company reached a $1 billion, 12-year deal with the Federal Government for subsidiary Seqirus to provide influenza and fever vaccines. Ramsey Health Care and Sonic Healthcare both added 1.1%, while Cochlear rose 0.7%.

The Information Technology sector fell 0.2% yesterday, dragged lower by buy-now-pay-later stocks. ASIC published a report on the buy-now-pay-later industry, which revealed the amount of credit has doubled in the last 12 months and one-in-five customers have missed payments. As a result, ASIC has announced several regulatory changes to be implemented from October 2021. Afterpay fell 0.4% and Zip Co slipped 0.8%, while Sezzle dropped 1.4%.

The market is expected to resume at 10am today, with the Australian futures market pointing to a 0.02% fall.

European sharemarkets closed at their highest levels in more than eight months on Monday, as investor confidence increased following positive COVID-19 vaccine data. The Financials sector closed higher; HSBC jumped 4.3% and Barclays climbed 3.4%, while Lloyds Bank and Deutsche Bank added 2.5% and 1.4% respectively. The Industrials sector also outperformed; Veolia gained 2.8%, Eiffage rose 1.9% and Vinci closed up 1.3%. By the close of trade, the German DAX added 0.5%, while the STOXX Europe 600 and the UK FTSE climbed 1.2% and 1.7% respectively.

US sharemarkets also advanced overnight after Moderna’s vaccine was shown to be 94.5% effective in preliminary analysis of a late-stage clinical trial. Moderna surged 9.6% following the release of the COVID-19 vaccine data. The Energy sector was the strongest performer, up 6.5%, following a 3.0% rise in global oil prices on Monday. Chevron jumped 7.1%, while ExxonMobil climbed 5.8%. By the close of trade, the Dow Jones added 1.6% and the S&P 500 rose 1.2%, while the NASDAQ closed up 0.8%.

The chart below is interesting for a number of reasons.

It shows during the Trump years a widening spread in consumer sentiment between Republicans and Democrats, which coincides with an elevated level of polarisation of the US population.

The implication is that greater negative sentiment among the non-incumbent Republicans weighs on overall consumer confidence. The near-term risk of potential widespread lockdowns could halt the post-election euphoria among Democrats, which could trigger a meaningful decline in consumer sentiment, which would weigh heavily on the consumer driven US economy and the stock market.

Joe Biden’s challenge, if he ever gets the opportunity to be President!, is to narrow the political divide in the US, which could see higher consumer sentiment than experienced under Trump. 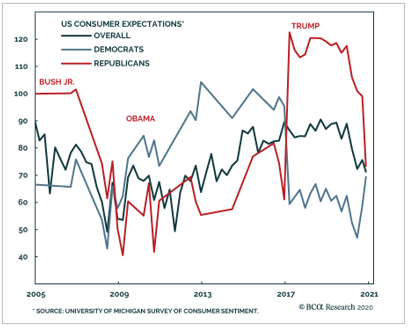