The Total Superannuation Balance threshold a person can have and still be allowed to make non-concessional contributions increased from $1.6 million to $1.7 million. Further the Total Superannuation Balance a person can have and still make non-concessional contributions under the bring-forward rule also increased, as demonstrated in the table below: 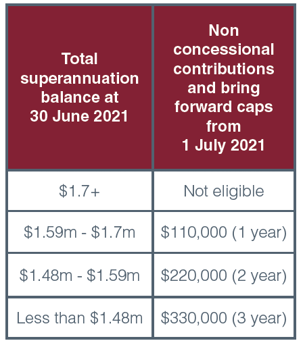 Extension of the temporary reduction in minimum pension draw-down rates.

The temporary 50% reduction in the minimum pension payment requirements has now been extended for another 12 months to cover the 2021-22 financial year.

Increase in the maximum number of members in an SMSF.

The maximum number of members that an SMSF can have increased from four to six from 1 July 2021.

If you are interested in knowing more about how these proposed superannuation measures will impact you or your superannuation fund, please reach out to your adviser.