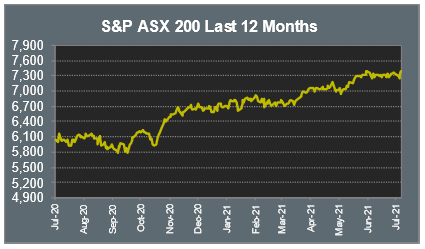 The Australian sharemarket jumped 1.1% to end the session at a record closing high. The Materials sector led the gains, up 2.2%, aided by an increase in commodity prices.

BHP was the best of the major miners, after the company announced they will supply nickel from Western Australia that will be used in Tesla’s electric cars. Shares were up 3.1% to close at $51.45. As for the other miners, Rio Tinto gained 1.2%, while Galaxy Resources soared 9.5%.

A significant jump in the price of oil led to gains across the Energy sector. Woodside Petroleum added 3.2% and Santos lifted 2.6%, while Beach Energy climbed 5.0%.

The Financials sector closed the session 1.1% higher, aided by gains from the big four banks. Commonwealth Bank gained 1.5% and ANZ lifted 1.3%, while Westpac and NAB added 0.7% and 1.2% respectively.

The Australian futures point to a 0.21% fall today.

European sharemarkets continued their recent run of strength overnight as the European Central Bank agreed to keep interest rates at a record low. Travel and leisure stocks led the gains, despite being heavily sold-off in the past week due to rising concerns over the Delta COVID variant. Air France added 0.4% and easyJet lifted 0.9%, while Ryanair jumped 3.5%.

US sharemarkets also closed higher overnight, helped by gains in the Information Technology sector. Sector giants Apple and Microsoft added 1.0% and 1.7% respectively, while Amazon finished the session 1.7% higher. All ‘big tech’ companies are set to report their quarterly reports next week. By the close of the session, the Dow Jones added 0.1% and the S&P 500 lifted 0.2%, while the NASDAQ gained 0.4%.

It has not been spoken of much over the last few years, however, the US Treasury debt ceiling will be back in focus over the coming weeks and months, with the US Government most likely running out of money to pay its debt obligations by the fourth quarter, unless Congress chooses to continue suspending the debt ceiling or increases the borrowing limit.

Congress voted in 2019 to suspend the debt ceiling until 31 July of this year. Since then, the Government has added US$6.5 trillion in debt, bringing the total amount owed to US$28.5 trillion.

If lawmakers cannot reach another agreement before the end of this month, the borrowing limit would automatically be reinstated at the current level of debt and the US Treasury would not be able to raise additional cash from the sale of government securities.

If it cannot raise new money, the Treasury has said it would implement measures to keep paying the Government’s debt obligations in full and on time, as it has in the past. Those measures, such as redeeming certain investments in federal pension programs and suspending new investments in those programs, have previously freed up enough cash to last several months.

While US Government debt has been on an upward trajectory for over 20 years, spending measures implemented last year to combat the economic toll of COVID-19 have caused it to jump significantly.

A full default by the US Government has never occurred, however, fights over the debt ceiling have occasionally rattled financial markets.