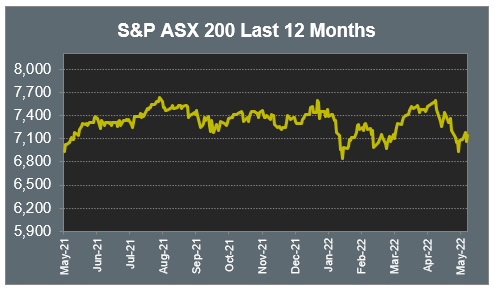 The Australian sharemarket enjoyed a positive end to the week, as it rose 1.2% on Friday, and 1.0% over the course of the week. This comes as China announced they would take measures to aid its economy as the country eases its strict COVID measures.

In company news, online marketplace, MyDeal, soared 55.8% after it was announced that Woolworths had agreed to acquire the company for $1.05 per share. Woolworths shares were up 0.5%.

The Australian futures market points to a 0.21% fall today.

European sharemarkets closed higher on Friday, as it followed strength from the Asian markets as the People’s Bank of China cut its 5-year lending rate. Automakers outperformed during trading; Porsche added 1.0%, while Volkswagen Group lifted 0.3%.

The Travel & Leisure sector was the next best performer on the markets, as easyJet added 3.2% after the company announced strong half-yearly results. Among the other airlines, Lufthansa followed suit to add 0.7%, while Air France gained 1.1%.

US sharemarkets were mixed on Friday, as the indices continued their recent run of weakness. The Financials sector declined, as the major banks all lost ground. JP Morgan and Wells Fargo both dropped 0.8%, while Citigroup was relatively flat.

The Information Technology sector was mixed, as Microsoft and Alphabet shed 0.2% and 1.3% respectively, while Apple bucked the downward trend to close up 0.2%. Cybersecurity providers enjoyed gains; CrowdStrike Holdings lifted 4.3% and Fortinet rose 3.7%.

The Australian Labor Party (ALP), along with a number of independents, rose to power on the weekend following a sweeping election result.

They enter government in an economic backdrop of fiscal repair, facing a cost-of-living crisis driven by steep inflation and with a program of rising interest rates already underway.

Both parties were looking to grow their way out of the pandemic debt, with the ALP focused on wages growth, aged care, childcare and the NBN.

With injections coming in the form of higher government spending in the near term and an ALP commitment to a 5.1% (in line with CPI rises) increase in the minimum wage, will the Reserve Bank of Australia need to raise rates further than their current guidance.