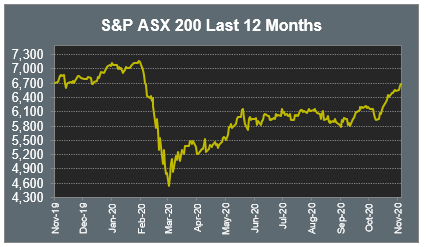 The Australian sharemarket rose 0.59% yesterday, as the local ASX 200 closed within a point of where it started the year. Gains were broad based, as all sectors ended the session positive, with Energy the strongest performer. Despite a surge in coronavirus cases in the US and northern hemisphere, the price of oil has strengthened ~20% in November, amid hopes a vaccine will boost demand for the commodity. Origin Energy increased 4.0%, while Woodside Petroleum rose 3.0% and Santos climbed 2.7%.

Mining heavyweights BHP and Rio Tinto jumped 3.0% and 1.1% respectively to boost the Materials sector, while Fortescue Metals rose 2.8%. The Telecommunications sector was boosted by Telstra, which lifted 1.3%.

Clothing multinational Kathmandu fell 4.2%, after the company revealed a 24.1% drop in retail sales this financial year, affected by coronavirus restrictions in Australia and overseas.

The Australian futures market points to a 0.06% fall today.

European sharemarkets eased on Wednesday, after the European Union’s chief executive said the European Commission could not guarantee there will be a trade pact with Great Britain following the latter’s exit from the EU. However, UK water company United Utilities strengthened 2.3%, after it proposed a higher interim dividend and HelloFresh surged 5.2%. Industrials stocks Veolia Environnement and CRH strengthened 3.7% and 1.9% respectively, while Tesco added 0.8%. The broad based STOXX Europe 600 slipped 0.1% and the UK FTSE 100 slid 0.6%, while the German DAX was flat.

US sharemarkets were mixed overnight, as disappointing jobs data limited positive investor sentiment ahead of the Thanksgiving Day holiday. Gains were led by the Consumer Discretionary, Information Technology and Consumer Staples sectors, while Energy, Materials and Industrials were among the laggards. Earnings results were mixed among retailers; luxury department store chain Nordstrom soared 11.2% after the company reported better than expected EPS, while Gap sank 19.6% after it missed fiscal third quarter earnings estimates. PayPal gained 4.1%, Tesla rose 3.2%, Amazon climbed 2.2% and Apple added 0.8%. By the close of trade, the NASDAQ rose 0.5% to end the session at a fresh record closing high, however, the Dow Jones dropped 0.6% and the S&P 500 slipped 0.2%.

Global bellwether US stock index, the Dow Industrial Average, surpassed 30,000 for the first time on Wednesday, as investors relaxed from the political uncertainty that had built up leading into the US Federal election. The Trump administration now appears to be offering its ‘sincere’ assistance after the sitting president formally cleared the way for an orderly transfer of power, following a fortnight’s delay.

Besides ranting about the election, President Donald Trump has been busy creating a tougher stance on international relations with countries such as China and Cuba, as well as withdrawing troops from Afghanistan. However, these stances may not last long.

President-elect Joe Biden has named Janet Yellen as America's next Secretary of the Treasury, the ex-Chair of the US Federal Reserve from 2014-18, as she commands respect among both Democrats and Republicans and is a much more market friendly nomination than Elizabeth Warren, previously a leading candidate for the position.

After four years of a highly abnormal administration filled with nepotism, policy by Twitter, a turnstile of senior government operators and an abrasive foreign policy, it appears as though we are returning to normalcy at the White House, which is lifting sentiment and filtering into asset prices.